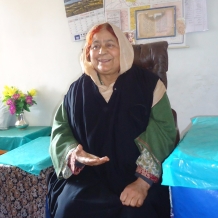 Situated in the heart of the pristine Sopore town and away from the clamor of the city life is an incredible treasure trove called Meeras Mahal. An extremely modest building, Meeras Mahal is an abode of numerous artifacts of historical and cultural importance that are yet to be disseminated to the outside world. The materials collected over more than three decades of relentless efforts by a legend, an unsung hero of the time — Ateeqa Bano. Born in 1940 in the same town, Ateeqa Ji spent most of her adult life serving as an educator and collecting and curating cultural artifacts of a myriad kind. Before her retirement from government service, she served as the Director of Libraries and Joint-Director Education (Jammu & Kashmir).

It was a pleasant morning in January 2015 when I set out for the historic town of Sopore during a ten-day trip to Kashmir to discuss the plans for a proposal to digitize the manuscript collection at Meeras Mehal. The meeting and the transportation was arranged by personnel at INTACH Kashmir, my collaborators on the proposed project. 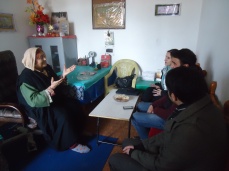 Ateeqa Ji’s eyes glimmered with joy when we arrived. I had explained the purpose of my visit earlier on telephone; she was expecting me. She greeted us with great fervor and high expectations. Wearing her usual “burqa coat” over a green pheran while a light cotton dupatta lay loose over her head, it seemed she were all set for the meeting. We started our 3-hour long journey in her little compound around midday — a small office space with very modest furnishing, no heating and no curtains in the room in the cold season. As Ateeqa Ji gave an introduction of the museum over a glass bowl filled with dried fruits —  almond, cashew nuts, pistachio and dates, a little girl with a scarf woven round her head kept sneaking in and looking at us from out the window. The window opened into the walkway leading to a series of similar-sized rooms in a row. An associate pulled a table from one corner and set it beside another one of slightly different dimensions in front of us. Ateeqa Ji opened a roll of plastic sheet with golden patterns and spread it over the tables for tea and more snacks. Thereafter, she took us for a tour of the museum, from one room to the other, walking us through history and revealing to us an enormous treasure of several generations. 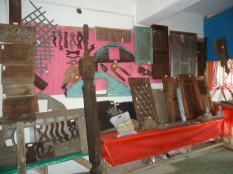 Ateeqa Bano’s Meeras Mahal is a repository of items illustrating Kashmir’s ongoing cultural history in a visual format – rare manuscripts, ornaments, pottery and terracotta utensils, metal works, wood works, stone crafts, traditional dresses and jewelry, a coin collection, some calligraphic works, and different kinds of tools. Each item in the repository has a name, a story, and Ateeqa Ji knew it all. Words that have fallen out of use in the language, items no longer seen in the Kashmiri households, are some of the various attractions I was impressed with during my few hours of experience at Meeras Mahal. 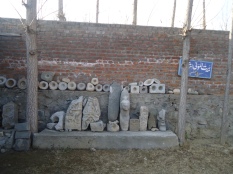 Picking up an item in her hands and demonstrating its importance in an exuberant manner, telling its story to the audiences – Ateeqa Ji had it all, the incredible motivation to explore and the passion to preserve Kashmir’s remarkable past, its rich cultural history. Our next stop was the manuscript collection — my primary interest in the museum. Ateeqa Ji handed me a copy of the inventory and we went through the list — item by item. Manuscripts were maintained in a pretty good condition given the limited resources she had had at her disposal.

As we sat down for a second course of tea and snacks towards the end of the meeting, Ateeqa Ji produced a document, a proposal for the creation of an institution of enormous potential.

She showed me the map of a proposed little township with many aspects including a proposed site for an “artists in residence” program she wished to set up as part of her efforts. It was a spectacular idea and I was fascinated, but it needed resources which had been consistently denied. Over the many years of her work on collecting and curating the artifacts, Ateeqa Ji had been desperately seeking financial support from the government and other sources for the maintenance and upkeep of the museum, for hiring trained staff, for infrastructure to preserve the artifacts, and for the upgrading of the building structure. 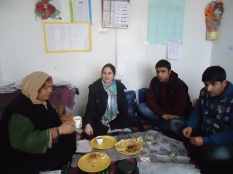 “If this kind of work was done by a man, he would be supported and recognized. Our society does not recognize women’s contributions,” she said to me in a humble tone as her associates moved their heads in silent admission. I knew she was right. I had nothing to offer before I left except for a promise to be fulfilled.

Ateeqa Bano was a woman of incredible motivation, an inspiration, an institution of her own. I could not help but fall in love with this woman of enormous potential and zeal.